Daydream had organised various events and attendees to entertain people, from a cosplay contest to Pete the Dinosaur. You can see some of the official photos, videos, etc on the Daydream Events Facebook page and the Sci-Feb event page. There was also coverage of the event by the Grimsby Telegraph, and you can see the online article here (now thankfully edited after some initially ill-judged comments).

The tone for the day was set very early on, when a young child with a "birthday boy" badge immediately burst into tears on encountering a Borg drone. While the prospect of assimilation is of course no laughing matter within the Star Trek universe, in Grimsby it was hilarious.

From the vantage point at the Armada Wars table there was plenty of people-watching going on. We learned that Batman is severely critical of non-Batman T-shirts and also blind to free Haribo. A pint-sized Jawa with an outstanding costume and sound effects negotiated to sell us some spare parts, but like his Jawa forebears in Star Wars: A New Hope he failed to come up with the goods. Doctor Strange turned out to be moonlighting as Crispy Collective, which until that world-bending revelation we had never once suspected.

The true highlight though was the look on Josephine Gillan's face when she realised that yes, we were all about to sing "happy birthday dear Fetch Monkey", and yes, that did include her too. 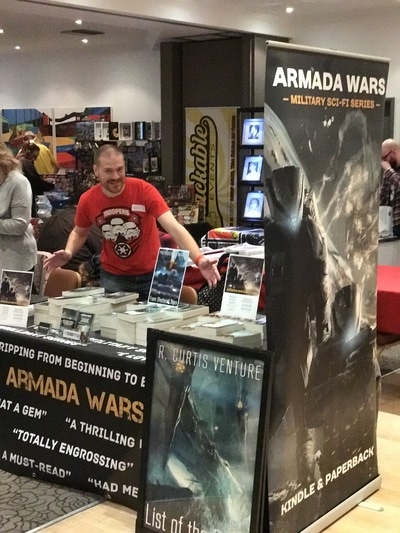 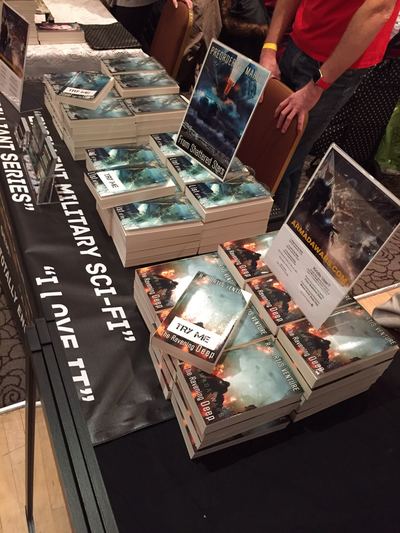 As it turned out a large proportion of the visitors to the convention were there for a family day out, which for this rather 'adult' series did not bode well in terms of sales. But then, 'a good sales day' was not the purpose of the trip for Armada Wars; it was to increase visibility, and find out what the convention world was all about. From that perspective: mission accomplished. It was interesting to note that some of the other traders also seemed to have a relatively slow day, even the ones you might expect to be busiest at a sci-fi convention.

Many of the people passing the table — whether they stopped or not — clearly found Adam Burn's artwork arresting, and that resulted in quite a few interested patrons pledging to check out the series using their Kindle Unlimited membership.

In view of the excellent questions asked by the people who stopped to speak with us, the about page has been rewritten to broadly address the question "is this for me".

All in all it was an enjoyable day, and we were glad to be part of it.